The Classic Scottsdale Chophouse with a Sports Obsession — And Killer Ribs

Have you eaten these barbecue ribs in Scottsdale? Jacob Tyler Dunn
Welcome to The Essentials, our catalog of indispensable and quintessential Phoenix food and drink. From now until May, we'll be sharing 50 dishes, drinks, and food experiences that make up the culinary backbone (and personality) of metro Phoenix. This list is highly eclectic, mixing classics with newer and lesser-known favorites. But all The Essentials have one thing in common: We think they're required eating (and drinking) in metro Phoenix.

Barbecue ribs are not exactly a hard sell. Unless you're a vegetarian, or abstaining from meat, it's hard not to be seduced by a long rack of saucy, gently charred barbecue ribs. And it's hard to think of a more tantalizing plate of ribs in Scottsdale than the ones you'll get at Don & Charlie's, a reliable Old Town chophouse with a bit of a sports obsession.

Since 1981, Don & Charlie's has been an outpost of Midwestern hospitality, sports nostalgia, knowledgeable service, and of course, fine steakhouse fare. There's a great New York Strip and a killer twice-baked potato. But the baby back ribs have achieved a level of reliable excellence that deserve special mention. They are smoked and basted, available in your choice of either "original" slightly tangy sauce or peppy "Arizona" sauce. We recommend ordering them "Don's Way," which yields a long rack with a vaguely chewy, caramelized char. The meat is so tender in places, it seems like you might be able to suck it through a straw.

The dining room at Don & Charlie's is soothingly dark and sunless, a respite from the blinding Arizona summer, and also from the glut of trendy restaurants and nightlife in the surrounding area. The walls are arrayed with one of the most impressive displays of sports memorabilia in the state; it's hard to avoid lingering in the restaurant's entryway to study the rows of signed baseballs and bats.

But this isn't a sports lounge that just happens to serve steak and ribs. The restaurant's white tablecloth dining room, finely tuned menu, and old-fashioned sophistication is welcoming even to non-sports enthusiasts. Are you likely to make a something of a small mess if you order the baby back ribs? Will you instinctively lick traces of sauce off your fingers? Will you want to return, season after season, for more? Most likely, yes. 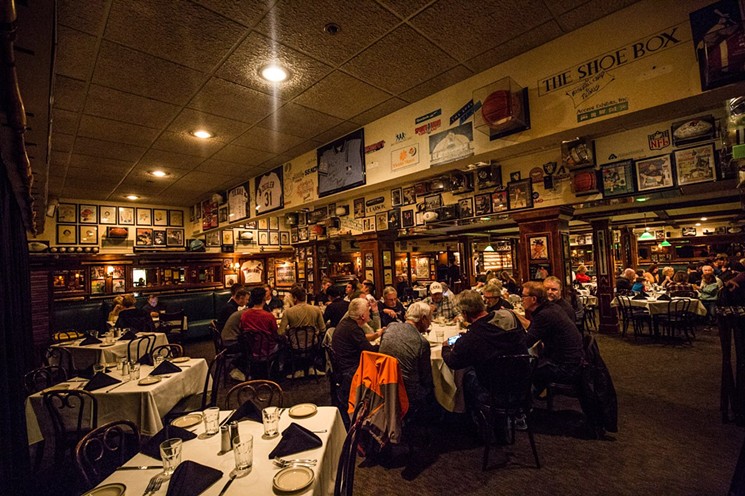