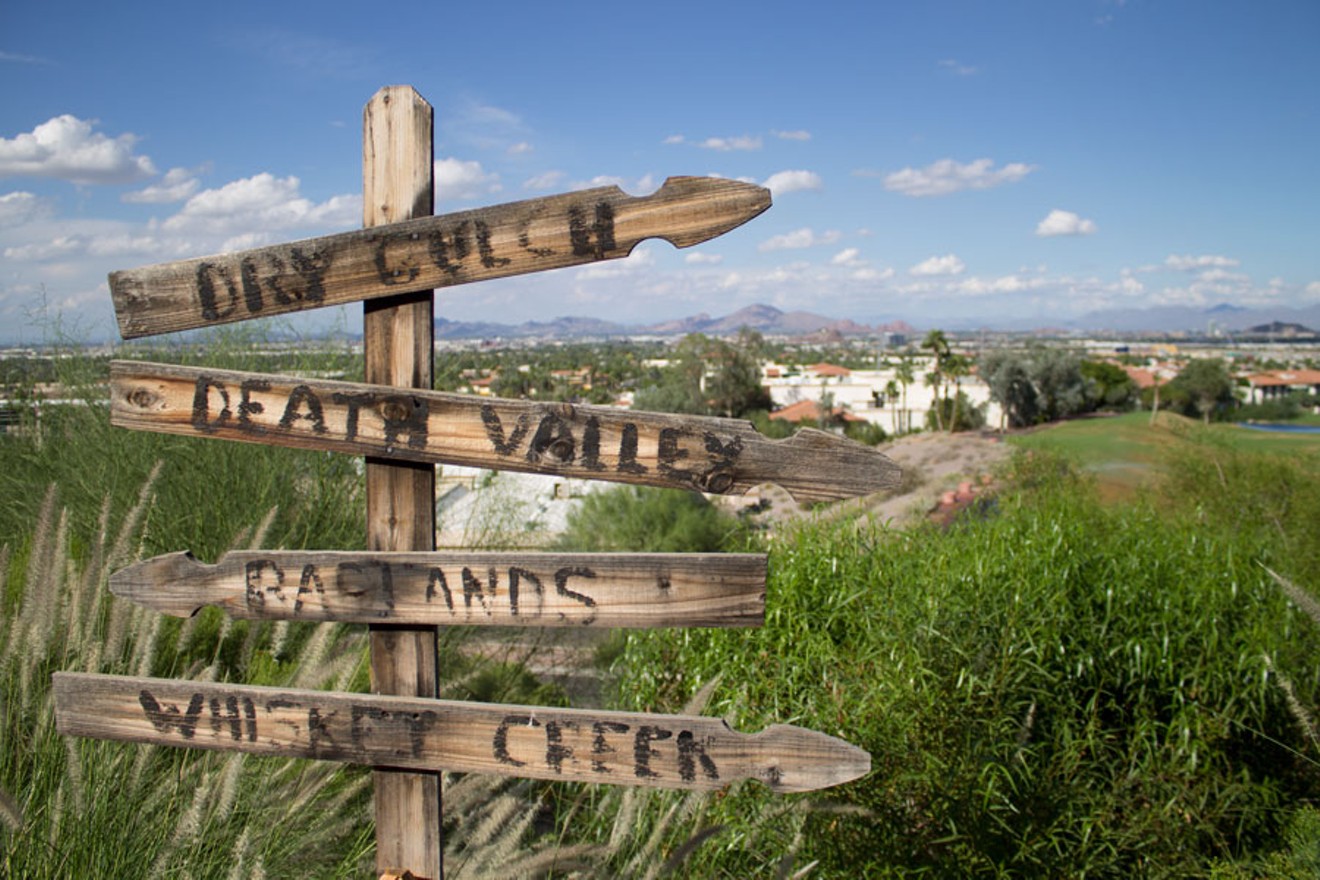 "Beef and brew with a view" is the unofficial slogan at this Phoenix institution. Sara Weber 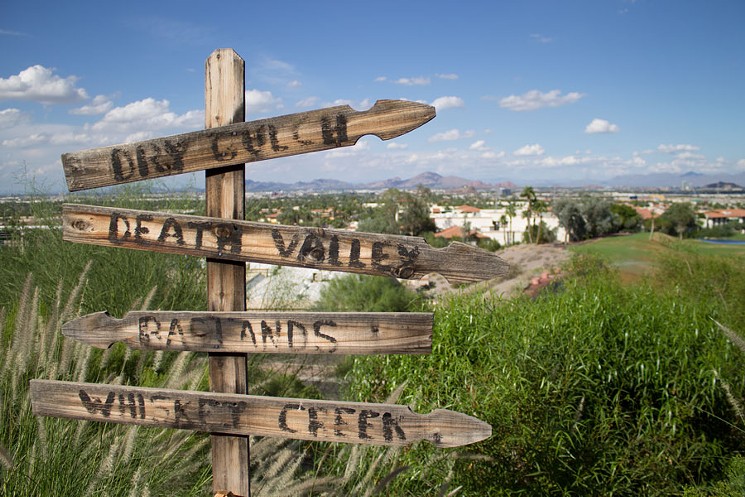 "Beef and brew with a view" is the unofficial slogan at this Phoenix institution.
Sara Weber
Welcome to The Essentials, our catalog of indispensable and quintessential Phoenix food and drink. From now until May, we'll be sharing 50 dishes, drinks, and food experiences that make up the culinary backbone (and personality) of metro Phoenix. This list is highly eclectic, mixing classics with newer and lesser-known favorites. But all The Essentials have one thing in common: We think they're required eating (and drinking) in metro Phoenix.

Now up, a cowboy-themed dinner spot known for more than its steaks.

Rustler's Rooste is the kind of place you take out-of-towners when they’re not the Scottsdale or hip, urban Phoenix type — or even if they are. It’s a cowboy restaurant with large sides, cooked-to-order steaks, and mason drinks. But there are several features unique to the Rooste, including live country music, a big shiny slide, and an incredible view of Phoenix from the restaurant's perch on South Mountain.

The Rooste has one of those legend-has-it backgrounds we treasure here in metro Phoenix. The site is said to have been a hideout for cattle rustlers (hence the name), later established as “Arizona’s Legendary Cowboy Steakhouse” in 1971.

Dinner here starts at 5 p.m., and the early bird gets the view. Waiting diners are escorted to the back of the restaurant where – depending on the time of year – a colorful Arizona sunset may already be underway. During your trek to the table, you’ll notice the reflective slide running parallel to a set of stairs. Your answer is yes, adults can go down it, too, assuming you don’t mind waiting your turn behind a group of kids.

Your meal starts with a cloth-wrapped basket of warm Indian fry bread and crumbly biscuits accompanied by little cups of cinnamon and plain butter. Your server will ask if you want anything from the full saloon, and if you’d like to start with the well-known Authentic Rattlesnake appetizer – which comes with Prickly Pear Cactus Fries and chipotle ranch. You’d be remiss to decline either.

Entrees here come in the form of protein and lots of it. The Southern fried chicken may draw envious glares, while the copy under the 10-ounce Rustler's Cut sirloin swears it’s a “steak that cowhands consider the finest tasting anywhere.” Other cuts from the chuckwagon include the Trail Boss porterhouse steak, the No Bones About It prime rib, and the Original St. Louis-Style Barbecued Pork Ribs. Plates come with corn on the cob, a shareable bowl of salad, and a little cauldron of cowboy beans.

Dessert here is not to be overlooked. Most tables get a complimentary serving of seafoam-green cotton candy, arriving in what is clearly an old coffee can, but don’t let that put you off your final course. If you have the family along, we recommend the giant (we mean giant) Nine Layer Chocolate Cake.

Rustler's Rooste is often the setting for weddings, banquets, anniversaries, and birthdays. There’s also a gift shop, ahem, General Store, slanging boot-shaped koozies, scorpion paper weights, and T-shirts adorned with “I ate the snake” to announce your dedication to the famed appetizer. It's truly some essential casual wear for any returning visitor to the Valley.

KEEP PHOENIX NEW TIMES FREE... Since we started Phoenix New Times, it has been defined as the free, independent voice of Phoenix, and we'd like to keep it that way. With local media under siege, it's more important than ever for us to rally support behind funding our local journalism. You can help by participating in our "I Support" program, allowing us to keep offering readers access to our incisive coverage of local news, food and culture with no paywalls.
Make a one-time donation today for as little as $1.

Lauren Cusimano was the Phoenix New Times food editor from 2018 to 2021. Joys include eating wings, riding bikes, knowing everyone at the bar, talking too much about The Simpsons, and falling asleep while reading.